1. Overview
I went to Panasonic Shiodome Museum of Art to watch the exhibition вҖңDreams of Life Connected by Modern DesignвҖқ. There were many works during the transition period when crafts handmade by craftmen turned into mass production using blueprints.
The exhibition seemed to be two sections. The first half is works of two architect group, Bruno Taut and Antonin & Noemi Raymond.
The Second half is Japanese modern design after World War II. I watched three designerвҖҷs work. Isamu Kenmochi, George Nakashima and Isamu Noguchi.

2. Bruno Taut
Bruno Taut is an architect who is famous for the episode that he praised вҖңKatsura RikyuвҖқ and criticized вҖңNikko Toshogu ShrineвҖқ.
In the furniture and crafts shop вҖңMiratesвҖқ, not only the interior, but also the signboards and wrapping paper were designed. So, I realized again that architecture is a comprehensive art!

3. Japanese Modern Design
ItвҖҷs introduced three designerвҖҷs works, Isamu Kenmochi, George Nakashima and Isamu Noguchi. They contributed to spread вҖңJapanese modern designвҖқ to all over the world.
ItвҖҷs beautiful that walnut wood grain used on the chair seat. And I surpprised that Akari series (works by Isamu Noguchi) inspired by Gifu lanterns.
Furthermore, what I felt impressive was art works which took an advantage of material itself.

4. Conclusion
Overall, It was good that a lot of drawing and sketching were displayed as well as a finished product.
In addition, the point where the relations of the postwar architects and artists had much friendship in not only the collaboration in the work but also the private was interesting. For example, Taro Okamoto drew a fresco on the building which Kenzo Tange had designed.
At the moment, itвҖҷs the best exhibition of this year for me!

Hammershoi painted many of these indoor painting.Amang them,there are many paintings of women in the back, paintings with suppressed color tone based on white , black, and gray,and style with a quiet atmosphere that stop time.
There is interesting a picture.It is somewhat awkward and flat.

The best picture about Hammershoi paintings is the candlelight.
Looking at this picture,what do you imagine whatcing?
I enjoy and feel cold.

By the way ,the other Skenism is smilar to the Impressionism.
It makes you feel the story and the movement of real life.
Fainaly , the atmosphere is different from the stillnes and the movement , but each of the picture that made me feel hugge.

Tsuzuku ~an Exhibition of Mina Perhonen by Akira Minagawa~

I am going to introduce Akira Minagawa, a founder and designer of the bland, Mina Perhonen, through my experience of visiting Tsuzuku, an exhibition at the Muse of contemporary Art Tokyo.

About a month ago, I went to the museum to visit Tsuzuku, which featured Mina Perhonen and his career. Mina Perhonen is a fashion brand that was born in Japan by Akira Minagawa in 1995. This time, this exhibition was held to celebrate the 25the anniversary of the brand. Within that, I could find a lot of his works that he made in his 25 years history, including garment, inertia design, graphic books, and so on.

Firstly, I am going to share a brief thought about his job. Akira has a passionate belief in his brand. вҖңDonвҖҷt make clothes which are in style only in a moment. Instead, make clothes that have universal value regardless of the transition of ages. Moreover, the clothes should make ownersвҖҷ usual days special.вҖқ Under this concept, the brand has several key patterns of designs, but donвҖҷt have various shape of goods. They reuse their designs for other items, customizing the color of decollations. In fact, his works donвҖҷt give us feeling fossil at all.

Next, let me talk about the exhibition. Entering the showroom, I was welcomed by a wall occupied entirely with well-designed cushions. 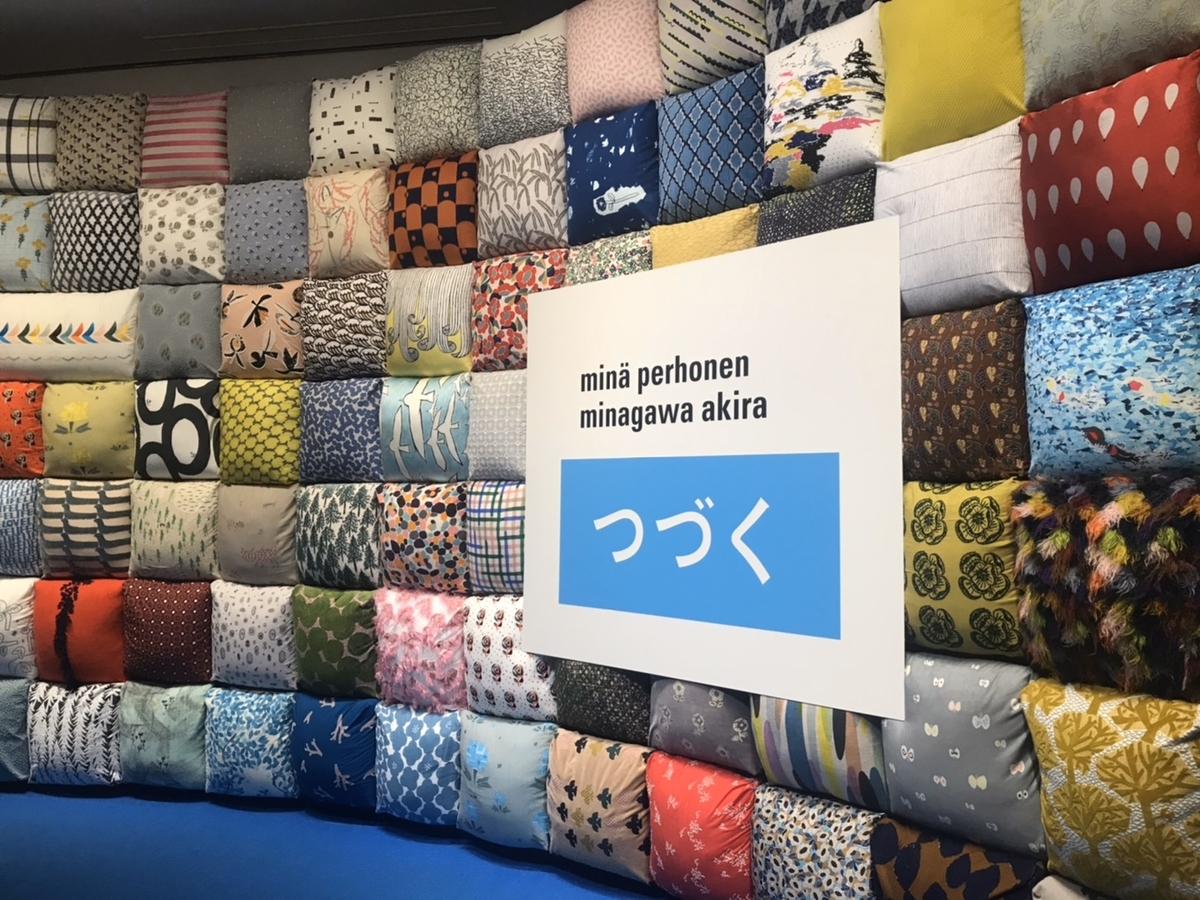 Also, I went into an impressive room accordingly. In that room, a lot of dresses were hanged up from the ceiling, and again the room was occupied with it. 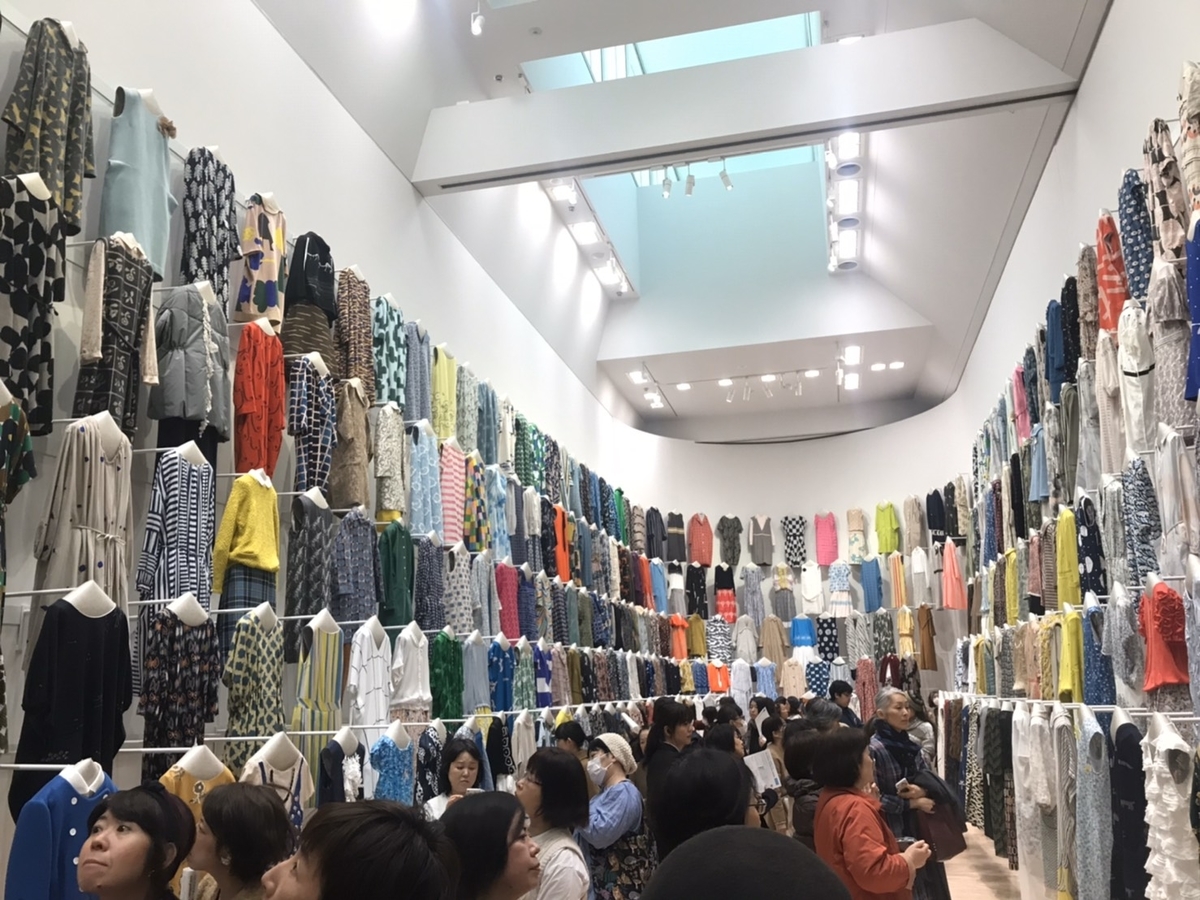 I was really amazed by the sight. All the items have almost the same shape, however, each of them has different unique patterns so that the room was amazingly colorful and brilliant. If I were asked to choose a dress which I wanted to wear, I wouldnвҖҷt have answered the question because all of them were too stunningly attractive to pick up just one for me.

Moving through rooms, I entered a section where about 10 thin glass showcases were set unevenly, displaying dresses inside. Looking close to a case which the height was almost the same as me, there was a story of whom had been wearing the dress for years written. That was a particularly unique part of the exhibition I have never seen like this style of display in other events before.
I remember one of the stories. вҖңA woman had a strict father. He didnвҖҷt give her positive opinions in general. Years later and later, she went to a hospital to visit her father, and she was wearing a dress from Akira Minagawa on that day. When the father saw her dress, he told вҖңIt is a very nice dress. Be a person who does not hesitate to have it.вҖқ My heart became warm when I read through the stories because there were intense but warm memories of people who had unforgettable experiences with MinaвҖҷs dress, and I felt that the space was filled with the loving-kindness of them.

Now, I have a dream. I wish I want to purchase a dress from Mina Perhonen in the future. And I dream I would live with the dress for the rest of my life. Thank you for reading.

Strength!
If someone ask me "what is the charm of Taro Okamoto?", I will answer that immediately.

Four years ago,it was my first time visiting the Taro Okamoto Museum, I couldn't say what I want to do, and I was just terrified of everyone's reactions.
But his painting was shocking.
When I saw Taro's picture for the first time, I was swallowed by the colorful colors.
"You can do itВ·В·В·В·anytime!"
I still remember the feeling clearly.В
That is "Taro Okamoto" for me.

February 26 in 1911,he was born asВ the eldest son of manga artist Ippei Okamoto and poet and novelist Kanako Okamoto.
ThisВ Taro permanentВ exhibition was about "Taro's holy family".
The novelist Yasunari Kawabata, who had a close relationship with the family,called them so.
This time, I would like to convey only a part of the charm of Taro OkamotoВ  talking aboutВ the exhibition.

(1) The uniqueness of the family.
The exhibition begins with commentary written by Yasunari Kawabata,both Kanoko, Taro ("Mother's Letter"), and Ippei written books about their families.
In addition, Ippei and Kanoko studied Buddhism to improve his marital relationship, and Ippei began to call Kanoko "Kanoko Kannon" to express her kindness , and Taro who heard it then drew "Kanon Kannon".The direction of this family was simply interesting.
Look at the book cover drew by Taro when he was 14 year old.
I think you can feel just by looking that Okamoto is not extraordinary.
I can feel the composition of abstract motifs, how to select colors that approach sentimentally, and the spread of mind and body.
I feel that he didn't need to study any talent education.
Because I think that the place where Ippei and Kanoko lived was already a place for excellent education.

(2) Rewatching again the picture by knowing about the family.
The interesting thing about this exhibition is that I was able to look at the picture like completely different one owing to the theme,even though me used to look many painting,.
When I rewatched "Mother and Child","Parting" and "Woman" ,that I simply like,by thinking their relationship ,it became another picture for me.
"Mother and Child" looks like a child swallowing a snake, but it looks like they are facing each other.
And looking "Woman",I naturally feel another idea "why he chose the red color?".

Conclusion
This time, I had a hard time squeezing out my impressions.
My love for Taro is too big to find the words about him.

In the end, whatever his family is,my love won't change .
And I think the best method to tell my love about Taro and his charms is only looking his pictures.(Saying this, my affliction for one weeks has no meaning.)
But it's OK!
Come to Kawasaki!
Taro is waiting!